Now the dust has settled, here's your chance to see what went on at this year's Target Open Day.

The feedback we've received has been overwhelmingly positive, with attendees getting new ideas for their businesses from the exhibitors and workshops, whilst the evening's events were a great opportunity for networking, sharing ideas and getting to know the Target staff and vendors.

We've uploaded photos, presentations and resources for you to use and remind yourselves of the exhibitions, products and workshops that took place.

If you have any suggestions for future events, please do drop us a line to let us know - just email us at openday@targetcomponents.co.uk

Thank you to everyone who took part.

Was it any good?

If you have any feedback on the Open Day, good or bad, please let us know so we can improve future events. Just email us at openday@targetcomponents.co.uk

"I wanted to say thank you for a fantastic, well-looked-after day on Friday. It was nice to meet others including Target's staff. Although I am a small customer to you, I was still treated like a VIP. Thank you again and I look forward to doing more business with you."

"I can say without a shadow of doubt that your Open Day is the best event I have ever attended, and I have attended a lot over the last couple of years - none are a patch on your Open Day.

From the organisation to the general footfall was fantastic, but the “family feel” of the whole thing and the relaxed nature is something I have never experienced before. Talking to your customers, you have such a loyal following it is something to admire and you should be very proud of.

I feel talking to you guys throughout the show I have learned a lot, and I must say I learned an awful lot from Paul with his ethos and beliefs surrounding business and relationship building."

"Just wanted to thank you and your colleagues for an excellent Open Day and evening.  Please pass on my thanks to Paul whose ShopTalk sessions were enlightening!"

"Firstly, just wanted to extend our thanks to you, Paul and the Target team for what was another great event. I would say this year even better for us, great ideas and some new product ranges for us to take on board as well as formulating some really good relationships with the likes  of WD and Seagate who will be our preferred partners in their fields when it comes to SSD and HDD storage. We amassed of lot of product material together with some nice POS materials from the likes of CoolerMaster, MSI, Gigabyte, Tenda and many more."

"Just a quick thank you email for a brilliant day and night we had a great time! My friend was feeling it the next day though! He had a full day hangover

Was very impressed with the setup of the day and it has definitely helped my business as I am pretty sure I am going to expand into CCTV after seeing Ian [from Uniview]." 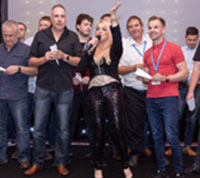 As 2018 was our 20th Anniversary year, the Open Day took a celebratory turn, particularly in the evening. The day's exhibition - our biggest yet with over 40 exhibitors, this year including new brands like Thermaltake, ECS and Patriot - and business workshops, which included product roadmaps and training for the first time, were business as usual. Workshop highlights included those from Tenda, ECS EliteGroup, West Yorkshire and Humber Cybercrime Unit as well as SEO specialist, Blue Digital who offered attendees a free website score on the day.

After a hectic day, the evening became even more energetic. We reintroduced the National IT Reseller Awards for our 20th Anniversary, with all winners judged and voted for by Target customers. The winners were announced after a three-course gala dinner, with trophies awarded by the night's compere and party-starter, Chrissie Bray. Chrissie then launched the night's events - a combination of party/ air-guitar/ dance-offs, paper aeroplane assembly and solid fun, running alongside perennial favourite, the poker table, and the chance for attendees to catch up again and meet new people. All in all, a fantastic day and evening that continued well into the next day - a very fitting 20th Anniversary celebration. 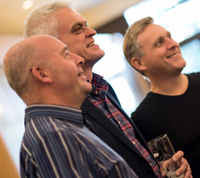 As well as the general exhibition this 2017 featured special Zones - dedicated spaces to showcase key products and services. A Gaming Zone for all the systems builders and players. A Smart Home Zone for all interested in this breaking business opportunity. And an Enterprise Zone for everyone interested in B2B IT products and services. Whoever you are there was an abundance of things to see and do.

Culminating in a packed dinner with guest speaker, The Gadget Show's Jon Bentley, the whole day proved a massive hit - and something to make bigger and better in 2018! 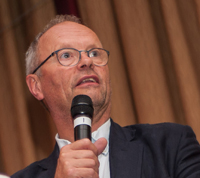 Google were on hand to advise one-to-one on using Adwords, Amazon on being a merchant and using their fulfillment services. BCMS were advising on how to sell your business. St James's Place Wealth Management on pensions and investments. GfK and Context were advising on upcoming trends and what's expected 'hot' for this Christmas.

To see highlights of the 2016 Open Day, click here. 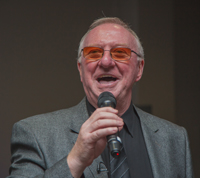 After a full-day's hectic programme of workshops from the likes of Google, GfK, ACAS, as well as our own all-new ShopTalk workshops, attendees were treated to a great evening that saw former World Snooker Champion, Dennis Taylor present the ShopTalk National IT Reseller Awards. And after that he gave nearly an hour's worth of hilarious anecdotes and stories from his professional career. The exhibition provided a lot of entertainment too, with attendees competing for fastest lap on Project Cars, with varying degrees of success. Alongside global superstars like Microsoft, ASRock, BullGuard, Kingston and Three a whole wall of the exhibition was devoted to new products and gadgets available at Target.

To see highlights of the 2015 Open Day, click here. 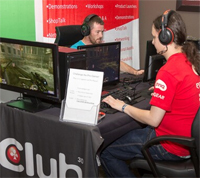 After a fantastic 2013 event, we were back at The Village Hotel for the 2014 Open Day. Alongside a record number of exhibitors (24 in total!) and all-new ShopTalk workshops centering on e-commerce, attendees were also treated to a number of special events - Q & A sessions with exhibitors, the rather over-subscribed 'Magic Box' talk about the massive opportunities available with NAS in the home, training sessions on the In-Store PC Builder, Microsoft Office and Refurbisher Scheme talks, Electrical Safety & not one, but TWO Cubbages presenting the Better Retailing session. After a day of information, products, networking & playing against an e-sports pro on the Club3D stand, the evenings events culminated in the second ShopTalk National IT Reseller Awards - and there were a few suprises in store there too! Click here for the full awards video. 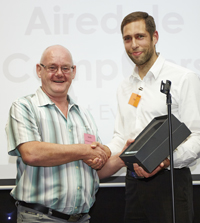 Our fifteenth birthday and our first event at the excellent Village Hotel in Leeds. ShopTalk sessions ran throughout the day (see the videos on the 2013 Open Day site) for the first time alongside a full exhibition in the main hall. The after show party hosted the inaugural ShopTalk National IT Reseller Awards, with ten awards handed out to eight resellers on the night. The ShopTalk awards are the only awards exclusively for - and with winners voted for entirely by - independent IT resellers. It was also the only awards presentation featuring references to Sonya's singing, Tim's moaning, or Scott's acting career. Click here to see the full video of the awards presentation or here to see the 2013 post Open Day site. 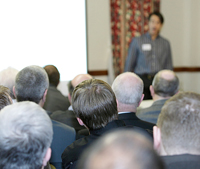 We'd planned to have a year off to focus on developing ShopTalk (and keeping our powder dry for our 15th birthday). The Windows 8 launch proved too good an opportunity to miss. Held off-site for the first time, we launched our very own ShopTalk training workshops with four one-hour sessions capped off with the results of our inaugural National Price Comparison. The after-show party included comedian, quiz, and casino.
To view the photo gallery for this event please click here 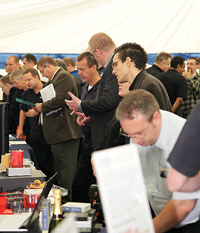 We expanded the training theme with the introduction of business training from HMRC, Bank of England, Business Link and others, specialist exhibitions in the main hall included digital home, virtualisation, and laptop and mobile phone repair workshops. The after show party - previously held at the local pub - was brought in-house for the first time with the "Target Arms" hosting a fully stocked bar, buffet food, pub quiz, pool table, Wurlitzer jukebox and comedian.
To view the photo gallery for this event please click here

We extended the training theme with four separate rooms and presentations running throughout the day. Servers Plus had a stand for the first time and were supported by new exhibitors such as HP, Fujitsu and IBM.
To view the photo gallery for this event please click here

Saw the launch of Tech Share and our Flexible Product Feeds. We introduced vendor presentations in the main hall and a separate Microsoft training room.

Our first Open Day to celebrate our 10th birthday. A marquee in the car park, vendor exhibitions, competitions, free drinks in the afternoon, and a free bar down the pub afterwards. 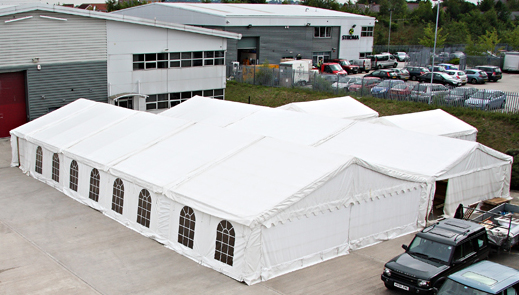